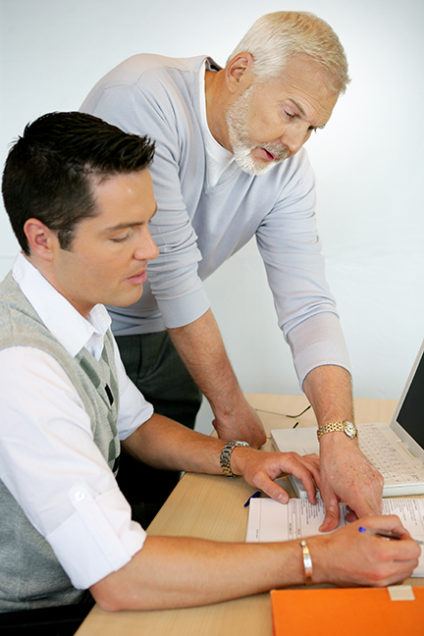 Posted at 15:59h in Uncategorized by Richard Rothstein 0 Comments
0 Likes

How do you train up newly-hired tax preparers?

Newbies need close supervision, and they learn best by monkey see, monkey do. Unless you are the only person in your office, spread the training effort across your staff. Have your admin people teach critical admin procedures, like using email, the telephone system, and proper bathroom etiquette.

Assign a manager or senior preparer as a mentor to teach your tax preparation procedures. We start every newbie with an online tax preparation course. This normally consumes a few days and builds a base of knowledge upon which to start. Have newbies watch their mentor actually preparing a return. The mentor explains each step in the process and why each is important.

After a few monkey-see sessions, it’s time for monkey do. Have your newbie reprepare a return from last tax season. Most tax preparation packages can create second versions of a return. Clear the data from the second version, give the tax documents to your newbie and let monkey do. Then compare the results to the original return.

Hopefully, your monkey won’t find errors made on the original return. This has happened. The mentor reviews the original and re-prepared returns side by side with the newbie, gently pointing out any errors, and most importantly, showing how the errors can either be avoided or corrected. Have the newbie make the corrections and review the returns again.

During the training process, the mentor emphasizes procedures and checklists. Your tax preparation procedures are in writing – correct? Start your newbie on real returns after three or four re-prepared returns.

Remember the “One Minute Manager” admonition to catch people doing something right? People learn faster with praise than criticism, newbies especially. When newbies feel they have not completed tasks successfully, they shut down. Make the result of every training exercise a success in some manner.

Here are some further tips in managing newbies after training them.

First, set project priorities for newbies. They will not manage their own workloads effectively. They tend to work on the first thing they see in their offices each morning, not necessarily your highest priority. A newbie and her manager should meet at least once per week to set out priorities for the coming week. During tax season, brief priority-setting sessions should happen almost every day.

Your job is to tell them, “Of course you’re falling behind. It’s March. You’ll catch up starting in April. Just keep moving forward.”

Be specific in your praise. General positive statements don’t mean much. Tell her that she did a great job on the S corporation basis worksheet, not that she just did a great job on the return. The occasional email praising is OK, but make habit of praising in person. That was awkward for me at first. The communication is more than verbal. The sincere smile on your face in late March means way more than the words.

Learn to fake this sincerity. Sincerity is tough in March when you just got a tongue lashing from your most important client. Don’t bring the negative emotion from that interaction into your interaction with the newbie. This is hard, really hard. During tax season, we are all bipolar, swinging between elation and despair.

Finally, move your newbies on to new tasks and types of tax returns as quickly as they can go. Once they are reasonably good at personal returns, move them on to business returns. Newbies tend toward boredom, and a bored newbie is a job-hunting newbie. Show him or her the path toward future development and more money. Pay for CPE and training for new skills.

Here are a few challenges in managing newbies.

First, they stink at time management and setting priorities. They waste a lot of time agonizing over projects in the beginning. You fix this by managing their time for them with close supervision. Their mentor must set goals with specific timetables for completing projects.

Second, every newbie at some point asks the question, “How can I be fast and accurate at the same time?”

Apparently, all accounting graduates take quantum physics as part of their accounting major, so you can know either where a particle is or how fast it’s going, but not both. Let them know that doesn’t apply to tax returns.

Let them know greater minds have pondered this eternal question and figured out how to do it. It’s called work intensity. That means typing with both hands and most of their fingers. That means not staring endlessly at the computer screen with motionless hands. I see newbies slouching in their chairs with one hand on the keyboard and the other hand, well, I really don’t want to know.

I want Congress to pass a law mandating that all kids spend a couple of years in blue-collar jobs before going to college. We would get much more intense entry-level workers. However, until Congress recognizes my brilliance, the solution to low intensity is setting challenging project deadlines and explaining that working long hours is not the same as working hard. Working hard can reduce the need to work long hours.

Third, newbies absolutely stink at reviewing their own work. The second they’ve entered the last number into a tax return, they are done. Yes, they’ll prepare your checklist, but not really. They don’t look at their work with fresh eyes.

Sending incorrect returns back to them for correction minimizes this problem. If they have to fix it, eventually they’ll see that messing it up in the first place made no sense.

One January, we had a problem with incorrect 1099-MISC forms and having to rerun them. There are probably no tasks in our office that are as pure mindless data entry as 1099 forms. We were having to do two levels of review to get them correct. Yes, that was insane.

I went to the person preparing the forms and told him that under our bonus plan when reviewers charged time to 1099s, he personally lost money. I told him that we make no money on 1099s when I get involved and that I needed him to do them right the first time. Against all odds, that worked.

There’s a strange psychological principle that states that people make more mistakes when they know their mistakes will get caught on review. I think this principle is related to the idea that tightrope walkers fall more often when there are nets.

I wish I had an easy solution to this. Two hundred thousand years of human evolution have not fixed this. So apparently, good self-review doesn’t significantly increase survival rates. The best you can do is make them fix their own mistakes and hope they recognize the value of their own time they are wasting.

Finally, an office environment might as well be Jupiter to newbies. They’ll do silly things like leaving one sheet on a toilet paper roll and not changing the roll. Or they’ll leave an empty roll of paper towels on the dispenser. They’ll leave rotting corpses in the refrigerator for weeks. Someday, they’ll eat that ham sandwich. It will taste great once it starts growing penicillin.

These are basic adult tasks not taught during the pursuit of a master’s in taxation. Because 21st-century parents are lacking, we must take on training their offspring in basic life skills.

You will be tempted to post signs with witticisms like, “Change the toilet paper roll or die.” Signs don’t work, and clients get a good laugh at our expense. I wish I had a decent solution to this, but I don’t. The best you can do is talk about it and lead by example.

So, if you think your newbie will follow the normal billing progression from $60,000 in the first year to $90,000 in the second and $120,000 in the third, you had better cut her in on some of the increased billings. We have a bonus plan based on billings that lets staff earn more as they bill more. A $40,000 newbie can earn nice bonuses if her billings rise above expectations. We give everyone a percentage of billings above their salaries plus a per-person overhead amount.

All of that guarantees nothing, however. You will still have a high percentage of newbies who leave after one or a couple of tax seasons. Some will leave for more money. Some will leave public accounting. Some will just leave because that’s what kids in their early 20s do.